Information on George Washington and Zeus from The Da Vinci Board Game website. 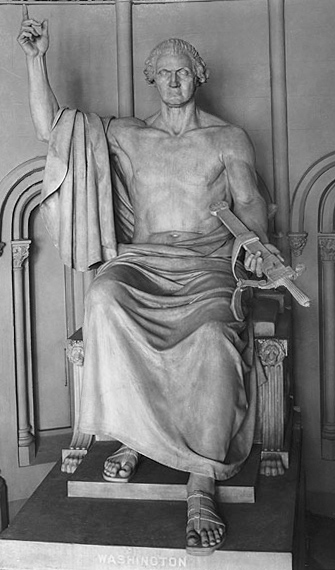 From Dan Brown's The Lost Symbol:

"Langdon said, "This Rotunda was once dominated by a massive sculpture of a bare-chested George Washington ... depicted as a god.

He sat in the same exact pose as Zeus in the Pantheon, bare chest exposed, left hand holding a sword, right hand raised with thumb and finger extended."

This image of George Washington as the god Zeus is shown to the right.

The statue of the First President of America was sculpted by Horatio Greenough.

The statue of George Washington / Zues weights 12,000 kg and was originally installed in Rotunda of the Capitol.

Due to its weight cracking the floor, it was relocated to the East Front of the Capitol in 1843.

After several other moves within the Capitol, the statue of Washington as Zeus was given to the American History Museum (then called the Museum of History and Technology).

Please see the links above for info about The Da Vinci Board Game.